Us fans know that Erotica is one of Madonna's most compelling work of art. It stands the test of time, broke so many boundaries and the songs are incredile However this album unfortunately isn't critically acclaimed the way LAP, ROL and COADF are. Imo Erotica arguably in some way could be her best album. It's fantastic from start to finish. She only worked consistently with 2 producers on it Andre Betts and Shep Pettibone (being a co producer herself) wrote the songs along with Shep and And

Erotica is her second best work in my personal chart. I also think it's a little underrated, especially for the strong musical and thematic identity and the originality it will always represent. It was indicated as one of the best experimental albums of the 90s by Rolling Stone though, a highly deseved recognition, and it's adored by many of her fans. Let me express my deep love in a few lines (I don't expect many of you will really read as they came out not that few, sorry)  She was brave a 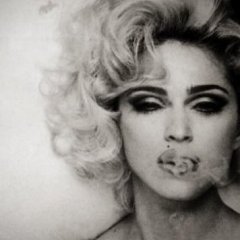 I wish she'd done more tracks with Andre. If I'm honest half the album I never to listen to anymore. I love Erotica, Fever, Where Life Begins, Bad Girl, Waiting, Rain and Secret Garden; the other tracks I skip.