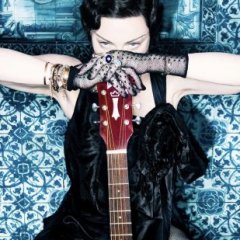 By Ayham,
January 17 in News ✖ Discussion

Fave: Herb Ritts, 'San Pedro' December 1989, later used in the Blond Ambition tour book, Interview magazine and The Immaculate Collection artwork. Least: Hard Candy by Steven Klein. A mess. Total mess. The only shot that worked was the one that they used on the cover on Interview magazine in 2008. Tom Munro did a much better job on that theme for the Sticky & Sweet tour book.

Confessions by Steven Klein, in all her versions: white dress, red dress, sparklin' shoes (my fav part lol) .... she was at her peak beauty and the whole disco/club soft vibe with lights effect and colors was simply amazing!